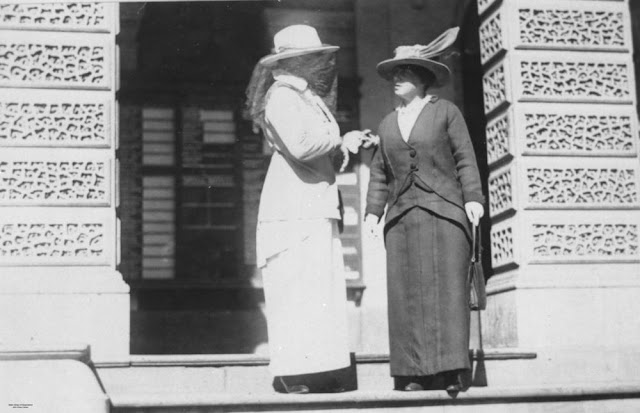 Two women photographed standing on the steps of the Queen Street GPO during a World War I peace procession in 1919.
Source: SLQ, JOL, image no. 121824. 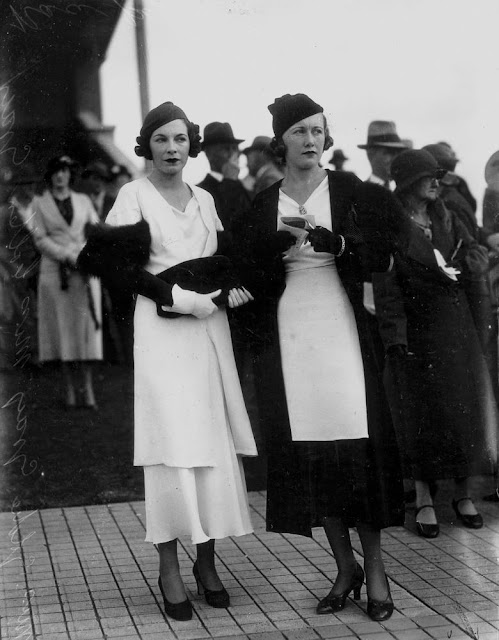 Colleen and Goldie Gray, at the Ascot races on Saturday 5 August 1933.
Source: SLQ, JOL, image no.  102691.
Style tells us a lot. It is emotive so it talks about what people feel and what they want others to feel. Architectural style changes rapidly and is used to project an image. There have been periods when people want to be prospective and periods when people want to be retrospective.

During the interwar years in Brisbane, no one style dominated. In fact, there was a style explosion. So much so, in 1959 it was described by one Brisbane architect as a "confused" period, architecturally. From the view point of the late 1950s when style was narrow, dominated by International and Mid Century Modern, the interwar period must have seemed haphazard. However, I think that interwar styles are quite understandable if you define them into two categories: the styles of 'romance' and the styles of 'optimism'.

I am fascinated by the ideas of 'romance' and 'optimism'. Looking backward and looking forward. Romantic style involves reminiscing, borrowing, and reinterpreting. Optimistic style involves inventing, anticipating, and aspiring. Both are dreamy and the interwar people of Brisbane did both freely if not equally. They concocted fairytale pasts of byzantine allure; invented fantasy futures of clean and healthy simplicity. It was play acting and it was fun.

Architectural style became more egalitarian during the interwar period. With the rise of the middle classes, more people concerned themselves with taste in all things, including architecture. Increased incomes meant more people could buy their own homes and domestic architecture began to occupy the general public's minds.

As they have always been, Australian architects were influenced by international style trends. These styles were transplanted to Australia freely and surprisingly quickly.

What style should my house be though? What do I want people to think of me?

The styles of ROMANCE

The primary inspiration from the past continued to be, as usual, Classical Rome and Greece. However, and very excitingly (for me), interwar style looked back to new places for style inspiration. In particular, places with warm and hot climates.

The Mediterranean style was considered particularly appropriate for Brisbane's climate. The style is characterised by an immediate and welcome connection between the interiors and the exterior/garden. Bright sunshine fell beautifully on pastel pinks, creams or apricots, defining simple forms. Minimal architectural detail deleted areas where water could accumulate, achieving an affordable result that would need less future maintenance. Interiors were cool and (to our modern eyes) relatively dark. The subtle, classic, and minimal style aged well and remained relatively popular. I imagine it as a style for those who were progressive but classically stylish possibly a little conservative. As opposed to ...

Spanish Mission
I have a soft spot for this style, I confess. For me, it sums up the early, halcyon years of the interwar period, a time a exuberant eclecticism and invention. Before the Great Depression, before the seriousness set in, there was Spanish Mission.
It is related to the Mediterranean style but was much richer and more romantic. It was almost stage set fantasy architecture in its unabashed attractiveness. This was heightened by being popular with Hollywood and featuring in films. The style conjures up images of warm night breezes, billowing sheer curtains, tinkling fountains, exotic riches, melodrama, mystery, languor and lassitude. I wonder if it was seen as a little unsophisticated by toffs. The style had all the characteristics of the Mediterranean but with heightened contrast and greater awareness of creating a 'scene'. It is hard to escape theatrical imaginings. Parapets were curled and curved and confidently outlined with strong colours (turquoise, black, mustard). Windows were likewise colourful and of differing and interesting shapes. Openings were screened by wrought ornamental metalwork. Courtyards, Juliet balconies, arched loggias with barley twist columns and striped canvas blinds, latticework, bay windows, expressed chimneys, and conical roofs on circular entry halls (sometimes all on one building!), ornament concentrated to an almost baroque effusion, dark stained timber and light painted stucco. Oh the drama. What kind of people chose this style? I hope I would have been brave enough to do so. However, even Spanish Mission pales in comparison to ...


Interwar Baroque
OK. Breathe.
This fantasy confection recalls the 17th century palaces of Europe. The Regent Theatre transported its patrons to palatial luxury for the price of admission. Genuine antiques were sourced from Europe (Belgian carpets, the main chandelier, paintings) and the interior was probably Brisbane's most lavish. During the 1930s Great Depression, it is easy to imagine the palace offered people a temporary escape from the harsh realities of their everyday lives. At the other end of the spectrum is ... 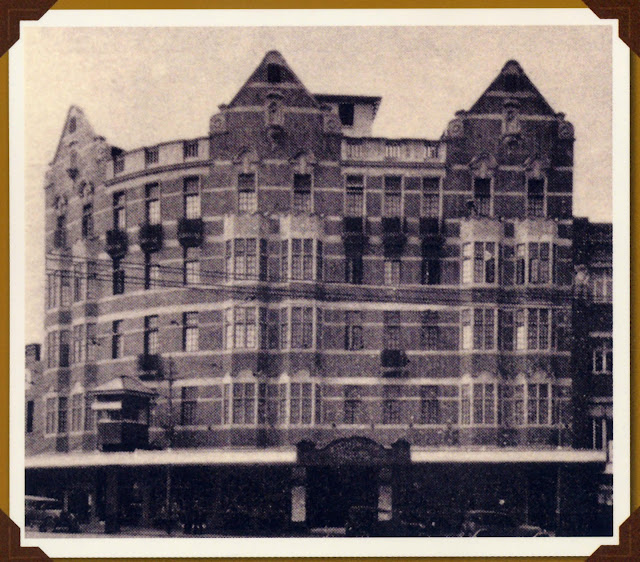 If you wanted to show you had class, connections to the mother country, upheld traditions, were old money, you would choose this style. BORING. Well, not really. But hardly exciting. Then, I suppose that was the point. Because the style originates in a cold climate, architects had a hard time adapting it to a sub-tropical context. Interwar buildings in this style are rarely airy and are mostly dark inside. The interiors are oppressive rather than enticing. There are very few semi-outdoor rooms - how do you make an Elizabethan verandah space? Regardless, this was a popular style for suburban architecture, more popular than others by far. 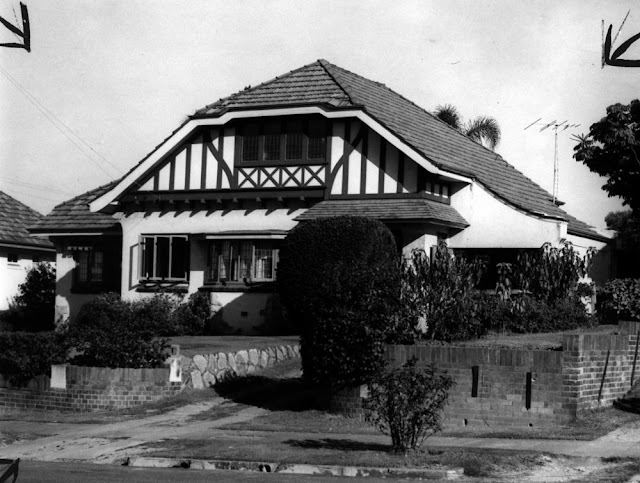 So now onto styles that seem to look forward into an idealised and exuberant future. Clean and bright. The frightful past of wars and poverty would be left behind.


The styles of OPTIMISM 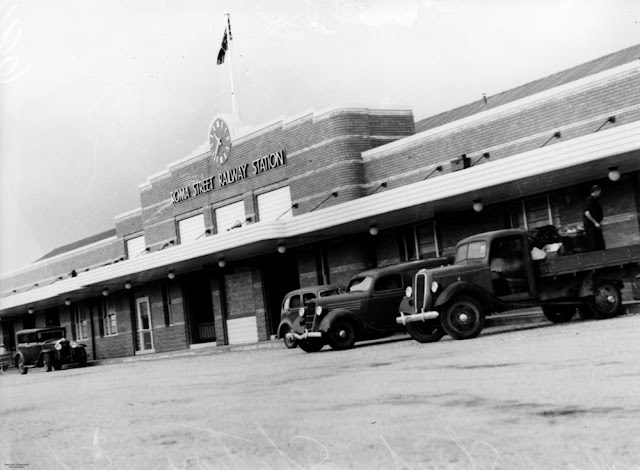 Here we are fully in the machine age. Architects allowed the 'function' of the building to inspire form and decoration. Rounded corners, block shapes, smooth sweeping lines, expressed materials, little decoration. This was new. This was modern. At the time is was termed 'Moderne' and must have been shockingly obvious amongst the existing urban fabric. 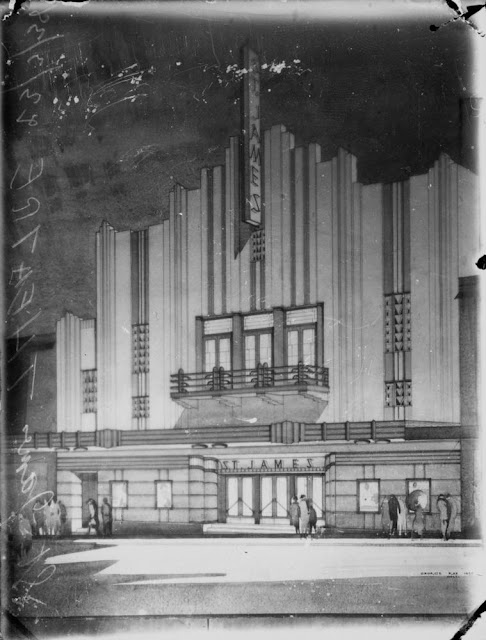 This style is the reason I became interested in architecture. I think Art Deco is the most popular style amongst the general public. It is decorative and exciting, unfussy and youthful. It speaks to me of delightful exuberance without glorying in decadence. I could go on forever but that'll do. For now. 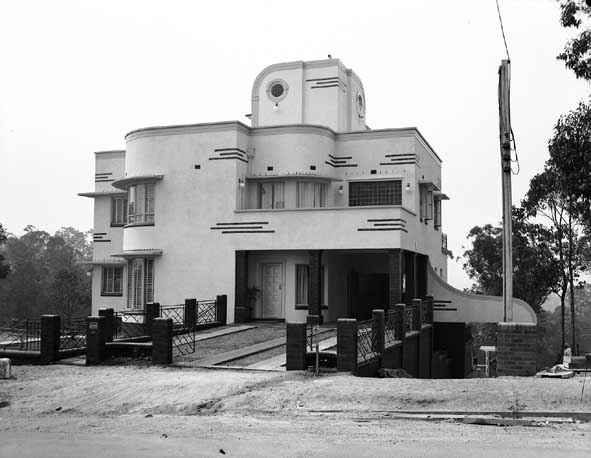 
These are my own definitions and are really just a guide. There was much crossover between the styles.

As Oscar Wilde said: fashion is a form of ugliness so intolerable that we have to alter it every six months. These fashionable styles were effectively ended by WWII, when the post-war austerity measures meant that, even if they could be afforded, they would seem garishly wasteful.
Posted by tyson at 9:47 PM